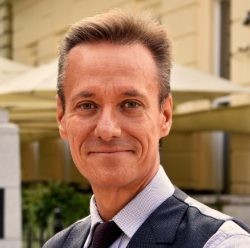 Patrick M. Powers is the founder of Europe’s Biggest business meetup and one of UK's most prolific authors, speakers and trainers on the subjects of sales-funnel conversion, lead-generation, marketing, Copy writing, Entrepreneurship and Influence.

He has been featured on BBC 3 times, interviewed by Forbes and is a regular guest on some of the biggest podcast shows in the world. See more here about Patrick’s Media coverage and appearances.

He is also the author of several highly acclaimed books including “Turn Your contacts into cash,” and “Deadly Marketing Weapons” and have several new ones on the way.

Patrick’s talks and work have inspired and helped tens of thousands of people in UK, US, Canada, the Caribbean, Germany and Denmark.

Patrick currently lives in London/UK, and travels all over the world to share his unique idiot-proof success secrets.

In 2009 he founded www.entrepreneursinlondon.co.uk : A community for entrepreneurs, which has now become the biggest business meetup in Europe.

Online Presentation Impact. How To Captivate Any Audience

Audio Presence. Captivate your audience and lead to action

The Link to Being an Influential Speaker